Growing Up in Coal Country 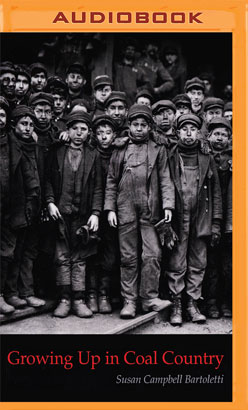 Growing Up in Coal Country

Inspired by her in-laws’ recollections of working in coal country, Susan Campbell Bartoletti has gathered the voices of men, women, and children who immigrated to and worked in northeastern Pennsylvania at the turn of the nineteenth century. The story that emerges is not just a story of long hours, little pay, and hazardous working conditions; it is also the uniquely American story of immigrant families working together to make a new life for themselves. It is the story of mischievous breaker boys playing tricks on cruel bosses during the noontime breaks. It is the story of women and children collecting coal to use and sell, defying the order of wealthy coal company owners. It is a story of hardship and sacrifice, yet also of triumph and the fulfillment of hopes and dreams.

“For a first-rate, accessible study of a time and place that played an important role in American economic and social history, look no further.” – School Library Journal, starred review