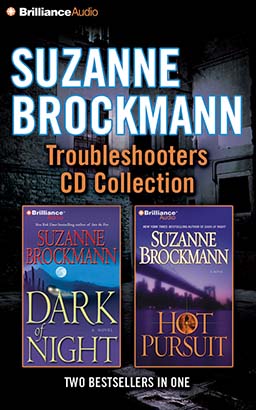 For years, operative James Nash has performed ultra-covert “Black Ops” missions for The Agency, but when he decides to walk away from their dirty work, his corrupt bosses aren’t about to let him go. After Nash is nearly assassinated, Troubleshooters team leader Lawrence Decker launches a skillful deception to neutralize the threat and protect his friend. With the FBI’s help, Decker fakes Nash’s death, then brings him to a safe house with his fiancée, Tess Bailey, to recover from his injuries and strategize their next move. But receptionist Tracy Shapiro puts two and two together, discovering the truth about Nash—much to Decker’s dismay. As passions flare, Decker struggles to keep his scheme afloat, and to keep Nash alive.

Alyssa Locke is no stranger to dealing with danger. As team leader of the nation’s number one personal security company, Troubleshooters Incorporated, she’s seen more than her share of action, survived plenty of close calls, and holds her own with the best of them—and against the worst of them. Guarding lives is her game, and no one plays it better. But her toughest challenge will be protecting herself from a serial killer she’s been after for years, a fiend who is determined to make her his ultimate trophy.