Heart of the Soul & Seasons of Life 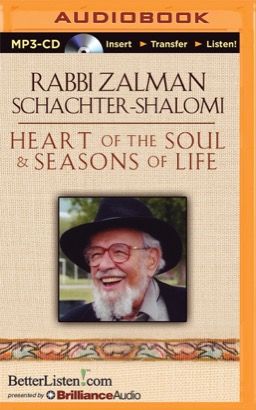 Heart of the Soul & Seasons of Life

Rabbi Zalman Schachter-Shalomi, more affectionately known as Reb Zalman, was originally ordained as an Orthodox rabbi in 1947. That, however, was just the beginning of his spiritual journey and study of world religions. He is spoken of as the “Father” of the Jewish Renewal movement—a post-Holocaust, non-Orthodox Jewish movement that blends kabbalistic and Hasidic elements, while also integrating other practices such as meditation, chant and dance, as well as borrowed elements of Buddhism, Sufism and Christian mysticism. His teachings are more experience than doctrine, a yearning for God, “Faith is tossing out into the future an anticipation for which I don’t have proof.”

This classic audio workshop of Reb Zalman—recorded during a weekend retreat in NYC—is an intriguing collection of prayers, song, stories and inspiration from a great religious teacher—a rare glimpse of the rebbe’s teachings about the cultivation of a living, breathing and evolving faith.