Merchant of Dreams, The 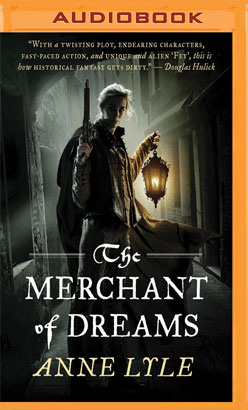 Merchant of Dreams, The

Exiled from the court of Queen Elizabeth for accusing a powerful nobleman of treason, swordsman-turned-spy Mal Catlyn has been living in France with his young valet Coby Hendricks for the past year. But Mal harbours a darker secret: he and his twin brother share a soul that once belonged to a skrayling, one of the mystical creatures from the New World.

When Mal’s dream about a skrayling shipwreck in the Mediterranean proves reality, it sets him on a path to the beautiful but treacherous city of Venice—and a conflict of loyalties that will place him and his friends in greater danger than ever.

“The Merchant of Dreams never fails to entertain. Whether you like action, magic, romance or mystery there is something for you here.” —Mazarkis Williams