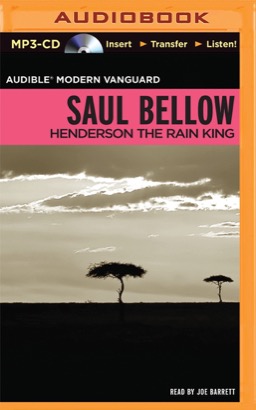 Henderson the Rain King is a seriocomic novel by Saul Bellow, first published in 1959. The novel examines the midlife crisis of Eugene Henderson, an unhappy millionaire. The story concerns Henderson's search for meaning. A larger-than-life 55-year-old who has accumulated money, position, and a large family, he nonetheless feels unfulfilled. He makes a spiritual journey to Africa, where he draws emotional sustenance from experiences with African tribes. Deciding that his true destiny is as a healer, Henderson returns home, planning to enter medical school.

“A kind of wildly delirious dream made real by the force of Bellow’s rollicking prose and the offbeat inventiveness of his language.” —Chicago Tribune

“Bellow’s aura of fable is constantly washed over by humor, impulsive creation, and actual, turbulent detail.” —The Nation