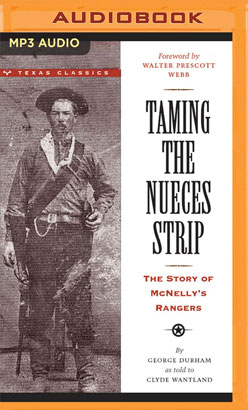 The Story of McNelly's Rangers

Only an extraordinary Texas Ranger could have cleaned up bandit-plagued Southwest Texas, between the Nueces River and the Rio Grande, in the years following the Civil War. Thousands of raiders on horseback, some of them Anglo-Americans, regularly crossed the river from Mexico to pillage, murder, and rape. Their main objective? To steal cattle, which they herded back across the Rio Grande to sell. Honest citizens found it almost impossible to live in the Nueces Strip.

In desperation, the governor of Texas called on an extraordinary man, Captain Leander M. McNelly, to take command of a Ranger company and stop these border bandits. One of McNelly's recruits for this task was George Durham, a Georgia farmboy in his teens when he joined the "Little McNellys", as the Captain's band called themselves. More than half a century later, it was George Durham, the last surviving "McNelly Ranger", who recounted the exciting tale of taming the Nueces Strip to San Antonio writer Clyde Wantland.

In Durham's account, those long-ago days are brought vividly back to life. Once again the daring McNelly leads his courageous band across Southwest Texas to victories against incredible odds. With a boldness that overcame their dismayingly small number, the McNellys succeeded in bringing law and order to the untamed Nueces Strip - succeeded so well that they antagonized certain "upright" citizens who had been pocketing surreptitious dollars from the bandits' operations.