Lifted by the Great Nothing 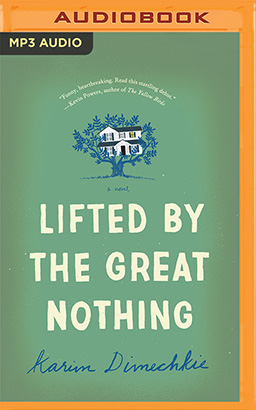 Lifted by the Great Nothing

Max doesn't remember his mother, who was murdered by burglars before they emigrated from Beirut to New Jersey. He lives with his father, Rasheed, who is enamored of his concept of American culture—baseball and barbeques—and tries to shed his Lebanese heritage completely. "When we are in America," Reed (for he goes by Reed in America, not Rasheed) tells Max, "we are Americans."

Rasheed has a singular purpose in life: to provide Max with a joyful childhood. He showers his son with gifts out of a belief that he deserves all and is capable of anything. Max wants nothing more than to convince his father that he is a successful single parent. The only thing that can disrupt their peaceful universe is the truth—which it does, with force.

When Max turns 17, he learns from Rasheed's ex-girlfriend that his father has been lying to him. Max's understanding of the world is so rocked that he is subsequently launched on an uncertain mission to Beirut and then Paris.

Lifted by the Great Nothing is a startlingly graceful and often hilarious coming-of-age story about the lengths we go to in order to preserve the untruths by which we live. With its poignant relationships, unsettling misadventures, and surprising love stories, it is a touching and devastating portrait of a young man coming to terms with his country's—and his own—violent past.