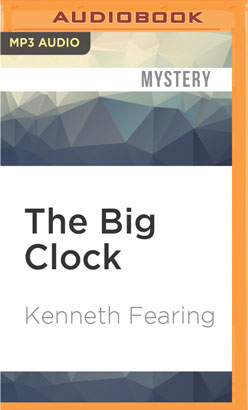 George Stroud is a hard-drinking, tough-talking, none-too-scrupulous writer for a New York media conglomerate that bears a striking resemblance to Time, Inc. in the heyday of Henry Luce. One day, before heading home to his wife in the suburbs, Stroud has a drink with Pauline, the beautiful girlfriend of his boss, Earl Janoth. Things happen. The next day, Stroud escorts Pauline home, leaving her off at the corner just as Janoth returns from a trip. The day after that, Pauline is found murdered in her apartment.

Janoth knows there was one witness to his entry into Pauline's apartment on the night of the murder; he knows that man must have been the man Pauline was with before he got back; but he doesn't know who he was. Janoth badly wants to get his hands on that man, and he picks one of his most trusted employees to track him down: George Stroud. Who else?

How does a man escape from himself? No book has ever dramatized that question to more perfect effect than The Big Clock, a masterpiece of American noir.
Read More