Dead Wander in the Desert, The 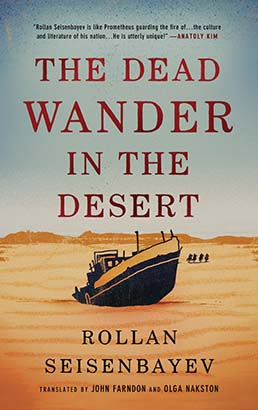 Dead Wander in the Desert, The

Longlisted for the PEN Translation Prize.

From Kazakhstan’s most celebrated author comes his powerful and timely English-language debut about a fisherman’s struggle to save the Aral Sea, and its way of life, from man-made ecological disaster.

Unfolding on the vast grasslands of the steppes of Kazakhstan before its independence from the USSR, this haunting novel limns the struggles of the world through the eyes of Nasyr, a simple fisherman and village elder, and his resolute son, Kakharman. Both father and son confront the terrible future that is coming to the poisoned Aral Sea.

Once the fourth-largest lake on earth, it is now an impending environmental catastrophe. Starved of water by grand Soviet agricultural schemes, the sea is drying out, and the land around it is turning into a salt desert. The livelihood of the fishermen who live on its shores is collapsing. Vanishing with the water is a whole way of life. Despite overwhelming odds, Kakharman wages a battle against an indifferent bureaucracy, while Nasyr looks to Allah for guidance. Without the support of neighbors, who have lost hope, Kakharman must travail alone to rescue what literally gives them life. Even as the consequences mount, his quixotic fight proves more daunting. Even the sea itself seems to roil with distress.

In the face of despair, the unwavering convictions of these soulful individuals offer hope. Rollan Seisenbayev takes readers on a cautionary, elegiac, and deeply compassionate journey into what it means to be human—to care and to fight against devastating odds. May humankind heed his warning cry.