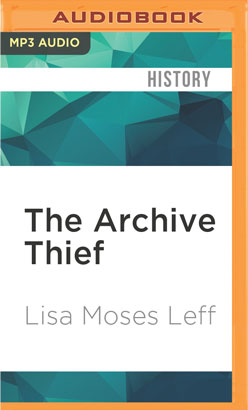 In the aftermath of the Holocaust, Jewish historian Zosa Szajkowski gathered up tens of thousands of documents from Nazi buildings in Berlin and, later, public archives and private synagogues in France and moved them all, illicitly, to New York. In The Archive Thief, Lisa Moses Leff reconstructs Szajkowski's story in all its ambiguity. Born into poverty in Russian Poland, Szajkowski first made his name in Paris as a communist journalist. In the late 1930s, as he saw the threats to Jewish safety rising in Europe, he broke with the party and committed himself to defending his people in a new way, as a scholar associated with the YIVO Institute for Jewish Research. Following a harrowing 1941 escape from France and US army service, Szajkowski struggled to remake his life as a historian, eking out a living as a YIVO archivist in postwar New York. His scholarly output was tremendous nevertheless; he published scores of studies on French Jewish history that opened up new ways of thinking about Jewish emancipation, modernization, and the rise of modern antisemitism. But underlying Szajkowski's scholarly accomplishments were the documents he stole, moved, and eventually sold to American and Israeli research libraries, where they remain today. Part detective story, part analysis of the construction of history, The Archive Thief offers a window into the debates over the rightful ownership of contested Jewish archives and the powerful ideological, economic, and psychological forces that have made Jewish scholars care so deeply about preserving the remnants of their past.