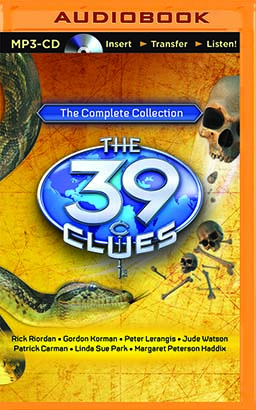 The Maze of Bones by Rick Riordan: Amy and Dan Cahill begin a dangerous race when they discover the source of their family’s power is hidden around the world in the form of 39 Clues.

One False Note by Gordon Korman: The siblings are in the lead when their search takes them to Vienna and a coded piece of Mozart’s sheet music.

The Sword Thief by Peter Lerangis: In Japan, Amy and Dan must decide whether or not to make an alliance with their unreliable uncle, Alistair Oh.

Beyond the Grave by Jude Watson: When the Cahills arrive in Egypt they receive a message from their dead grandmother.

The Black Circle by Patrick Carman: A telegram lures Amy and Dan into a race to uncover two of Russia’s biggest mysteries.

In Too Deep by Jude Watson: The siblings make a shocking discovery about their parents’ deaths as they track the next Clue to the Land Down Under.

The Viper's Nest by Peter Lerangis: While learning the art of ancient warfare, Amy and Dan uncover a secret about their family tree that changes everything.

The Emperor's Code by Gordon Korman: Amy and Dan are separated while attempting to steal a Clue guarded by the world’s best-trained soldiers.

Storm Warning by Linda Sue Park: The pair hits the high seas following a trail of infamous ancestors to track down a long lost treasure.

Into the Gauntlet by Margaret Peterson Haddix: Nearing the end of the hunt, Amy and Dan face their most difficult challenge yet—reuniting their backstabbing family.

Vespers Rising by Rick Riordan, Peter Lerangis, Gordon Korman, and Jude Watson: The Cahill siblings thought they could return to normal after the hunt for the 39 Clues, but powerful enemies will stop at nothing to grab the Clues for themselves.