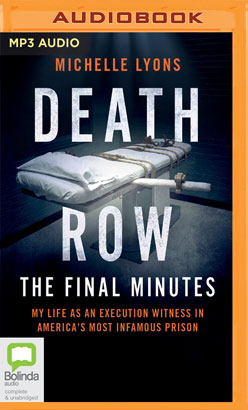 My life as an execution witness in America's most infamous prison

The remarkable, unbelievable and provocative story of one woman’s experiences working on death row in Huntsville, Texas.

First as a reporter and then as a spokesperson for the Texas Department of Criminal Justice, Michelle was a frequent visitor to Huntsville's Walls Unit, where she recorded and relayed the final moments of death row inmates' lives before they were put to death by the state.

Michelle was in the death chamber as some of the United States' most notorious criminals, including serial killers, child murderers and rapists, spoke their last words on earth, while a cocktail of lethal drugs surged through their veins.

Michelle supported the death penalty, before misgivings began to set in as the executions mounted. During her time in the prison system, and together with her dear friend and colleague, Larry Fitzgerald, she came to know and like some of the condemned men and women she saw die. She began to query the arbitrary nature of the death penalty and ask the question: do executions make victims of all of us?