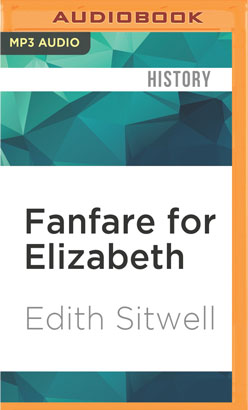 Sitwell's Fanfare for Elizabeth is a striking account of love, betrayal, and religion as it unfolds in the court of King Henry VIII. Sitwell navigates elegantly through the capricious nature both of Henry's court, and his love life. The youthful hardships of little Elizabeth are played out against the backdrop of the great drama of Henry's struggles with the Pope, and his six wives. Charming in style, Fanfare for Elizabeth ends on a vignette of Elizabeth in her early teens, still oblivious to the grandeur she will ultimately inherit.

Edith Sitwell (1887-1964) was born into an aristocratic family and, along with her brothers, Osbert and Sacheverell, had a significant impact on the artistic life of the 20s. She encountered the work of the French symbolists, Rimbaud in particular, early in her writing life and became a champion of the modernist movement, editing six editions of the controversial magazine Wheels. She remained a crusading force against philistinism and conservatism throughout her life and her legacy lies as much in her unstinting support of other artists as it does in her own poetry.