In Search of Safety 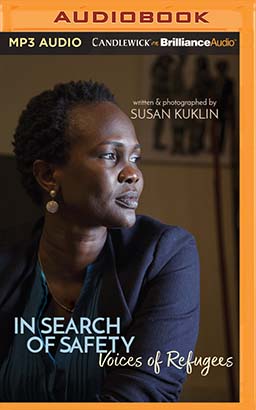 In Search of Safety

Five refugees recount their courageous journeys to America — and the unimaginable struggles that led them to flee their homelands — in a powerful work from the author of Beyond Magenta and We Are Here to Stay.

An Iraqi woman who survived capture by ISIS. A Sudanese teen growing up in civil war and famine. An Afghan interpreter for the U.S. Army living under threat of a fatwa. They are among the five refugees who share their stories in award-winning author and photographer Susan Kuklin’s latest masterfully crafted narrative. The five, originally from Afghanistan, Myanmar, South Sudan, Iraq, and Burundi, give gripping first-person testimonies about what it is like to flee war, face violent threats, grow up in a refugee camp, be sold into slavery, and resettle in America. This work is essential reading for understanding the devastating impact of war and persecution — and the power of resilience, optimism, and the will to survive.