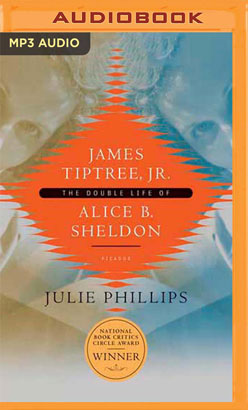 The Double Life of Alice B. Sheldon

James Tiptree, Jr. burst onto the science fiction scene in the 1970s with a series of hard-edged, provocative short stories. Hailed as a brilliant masculine writer with a deep sympathy for his female characters, he penned such classics as Houston, Houston, Do You Read? and The Women Men Don't See. For years he corresponded with Philip K. Dick, Harlan Ellison, Ursula Le Guin. No one knew his true identity. Then the cover was blown on his alter ego: A 61-year-old woman named Alice Sheldon. As a child, she explored Africa with her mother. Later, made into a debutante, she eloped with one of the guests at the party. She was an artist, a chicken farmer, a World War II intelligence officer, a CIA agent, an experimental psychologist. Devoted to her second husband, she struggled with her feelings for women. In 1987, her suicide shocked friends and fans. The James Tiptree, Jr. Award was created to honor science fiction or fantasy that explores our understanding of gender. This fascinating biography by Julie Phillips, 10 years in the making, is based on extensive research, exclusive interviews, and full access to Alice Sheldon's papers.