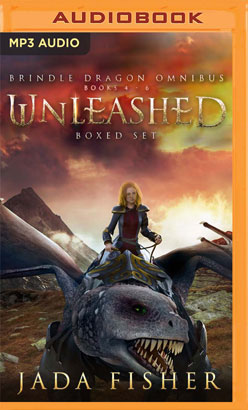 The forces of evil are growing stronger, and the only thing standing in their way is an ill-prepared young lady, her group of similarly under-trained friends, and a small dragon with unique powers.

Eist has recovered from her last brush with death, and Fior is finally learning to fly. Everything should be peachy now, right? Unfortunately, the forces of evil are growing stronger, and there may be nothing standing in their way. Can Eist and her friends stop everything the Blight plans to unleash, or is their world doomed to fall into darkness?

The Unleashed Omnibus contains the fourth, fifth, and sixth stories in the Brindle Dragon series, which follows the story of a young girl and her most unusual dragon as they set out to defeat the evil that threatens to destroy their world.

Read the Unleashed Omnibus and get started on your next epic adventure today!