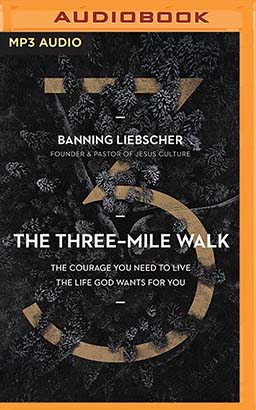 God is awakening dreamers. Those who refuse to settle for a passive life that waits for God to show up and move. Those who are eager to join him at the frontlines of his powerful, redemptive work in the world. This is where you get started.

The story of Jonathan and his armor-bearer (1 Samuel 14) carries a profound metaphor for the body of Christ today. Though embroiled in a seemingly losing battle with the Philistines, these two men had the courage and faith to take the fight to their enemy and believe that God would back

them up. To do so, they had to traverse a treacherous, three-mile canyon between the two army camps. After making this journey successfully, they boldly stepped into the battle and watched as God brought the victory that had seemed so impossible.

In The Three-Mile Walk, Banning Liebscher unpacks the significance of this story. Like the army of Israel, much of the church is camped out, not engaging the call of God on their lives. However, God is awakening dreamers like Jonathan and his armor-bearer—men and women who are divinely discontented with the idea of staying passive about the problems they see or disconnected from the desires stirring in their hearts.

The courage of these dreamers reminds us that we are all called by God to be like Jesus and to do great things like Jesus did—to overcome evil with good, do the impossible, and be part of seeing His kingdom come in the earth. The question before us is whether we will open our hearts to dream with God, become possessed with the same divine discontentment, and engage in pursuing our call with a true "Yes"—a "Yes" that says, "I take full ownership of this calling, and I refuse to settle for anything less than fulfilling it."

Once we decide to engage our calling with this "Yes," we have a journey ahead of us. The three miles of Jonathan's journey to the enemy's camp represent the three key areas of character transformation that we require to fulfill our calling—holiness, courage, and faith. In his approachable and memorable style, Banning brings both fresh and timeless insight and practical

instruction for growing in each of these areas.