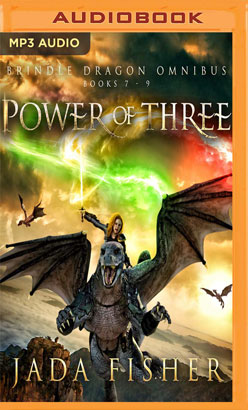 No matter how hard you try, sometimes you just can't survive alone.

The conclusion to the epic dragon-riding adventure from Jada Fisher, author of the popular Dragon Oracle series.

The battle has been intense, and the dragon riders have held off the Blight, but time is running out. When Yacrist succeeds in the first part of his plan, Eist must take action and prevent the world from falling into darkness. But at what cost. Can Eist and the dragon riders defeat the Blight or will Yacrist usher in a new era with him as the ruler of all?

The Power of Three Omnibus contains the last three stories in the epic Brindle Dragon series, which follows the story of a young girl and her most unusual dragon as they set out to defeat an evil they don't even know exists yet.