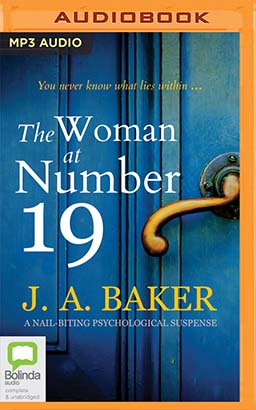 Esther lost her husband, Julian, and her children, Harriet and Dexter, in a car accident and is struggling with her grief.

Spurred on by her own loneliness and a need to make amends for not being able to save her own children, Esther takes it upon herself to watch the woman who lives at number 19.

But when unexplainable incidents begin to happen in Esther’s house, she begins to fear for her safety.

Meanwhile, over at number 19, the woman’s behaviour is becoming more explosive and unpredictable.

As Esther starts to lose her grip on reality, her world begins to unravel.

Just who is this strange woman at number 19?

And why is Esther so obsessed with her?

J.A. Baker is the internationally bestselling author of psychological thrillers, including The Other Mother and Undercurrent.

The Girl at Number 19 is a twisting and utterly compelling psychological suspense. It will appeal to readers of books like Rachel Abbott's And So It Begins and Samantha Downing's My Lovely Wife, as well as to fans of authors like S.E. Lynes, K.L. Slater and Lucy Dawson.