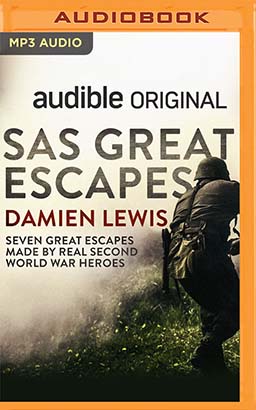 No food. No water. Out of ammo. Safety is south. But between there and here is 150 miles of barren desert – freezing at night, boiling in the day – populated solely by Ernst Rommel's fearsome and deadly Afrika Corps.

What would you do?

Give up? Or get on with it?

For the seven SAS supermen in Damien Lewis's explosive new audio exclusive, the answer was simple: Escape. Evade. Survive. From the mountains of Italy, to the deserts of Africa, these heroes epitomise the bravery, esprit de corps and daring do of Britain's finest elite fighting force.

Fans of Ant Middleton's First Man In and Ben MacIntyre's SAS: Rogue Heroes are in for a treat, as the SAS's master chronicler, Damien Lewis, has produced a gripping, heart-in-the-mouth, real-life thriller. A Sunday Times number one best-selling author, this fresh look at the most audacious escapes the SAS made in the Second World War is white-knuckle listening of the highest calibre.

Because if you put a fence in front of these men...they'll climb it.