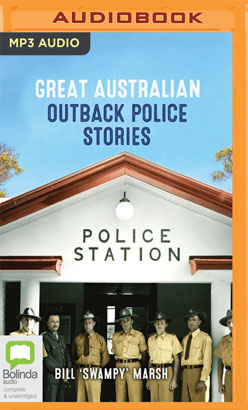 After there’d been a robbery in a block of Wiluna retirement units, two police officers arrive to begin their investigations. They knock on the front door of the first unit in the block. An old lady answers.

‘Lady,’ says one of the police officers, ‘where were you between 5 and 6?’

‘I’m not exactly sure officer,’ replies the old lady, ‘but I was most probably in kindergarten.’

Australia’s outback police have seen it all: natural disasters, incredible acts of selflessness, unspeakable crimes and daring rescues, to name just a few. And they’ve met some unforgettable characters along the way. This memorable and eye-opening collection of real-life accounts from cops on the frontline in the heart of Australia is by turns inspiring, poignant, heartbreaking and hilarious.

Bill ‘Swampy’ Marsh is an award-winning writer and performer of stories, songs and plays. He spent most of his youth in rural south-western NSW and now lives in Adelaide. Swampy is one of ABC Books’s bestselling authors of Australian stories.