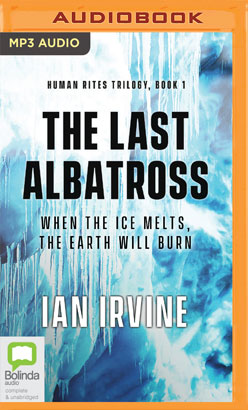 An embittered eco-terrorist. A deadly secret. The fate of the world rests on a most unlikely hero.

Jemma Hardey dreams of a quiet life, and starting a family with her partner, Ryn. Poor fool!

Because Ryn’s embittered friend Hercus is planning the ultimate crime: the destruction of western civilisation. And he expects Ryn to help him, for they share a dangerous secret from their student days. A secret that would send them to prison for a very long time.

Now Ryn has another urgent problem. His work on Antarctic ice sheet melting is showing alarming results and he can’t work out why.

Then Hercus’ secret gets out, it’s worth a fortune to a doomsday ecological cult, and Jemma and Ryn are on the run from ruthless eco-terrorists and professional hitmen. As Ryn struggles to work out what will happen when the ice melts, Jemma desperately tries to stop Hercus’s catastrophic plan – before it plunges the world into a war that can leave no winners.

And shatters her life and her dreams, forever.

You won’t want to miss this edge-of-the-seat eco-thriller by million-selling author Ian Irvine.

What reviewers say about the Human Rites series

“The action-packed plot of doomsday cults and planetary collapse isn’t far from the truth.” – The Times

“Ian Irvine is a great storyteller. Your heart pounds with the violence and adventure of the racing plot.” – Australian Bookseller and Publisher

“Irvine surpasses himself ... impossible to put down.” Sydney Morning Herald.

“The most important work of Australian science fiction yet published in this country.” Rob Jan, Sci-Fi Radio Zero-G.

“Frantic action and SF terror … in a world where corruption and technology are hell-bent on social destruction.” Murray Waldren, The Australian.

“One of the best genre writers around – Irvine's considerable narrative powers are brought to bear in a grim near-future vision of plot and counter plot.” Hobart Mercury.

“A book for right now, that everybody should be reading.” Keith Stephenson, Aurealis.

The Last Albatross listed in The Australian’s Best of Summer Reading, 2000.