Are You There, God? It's Me, Ellen 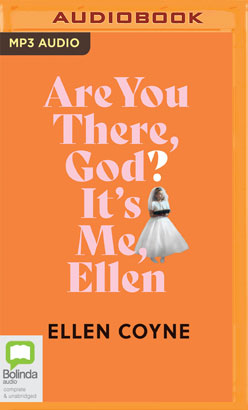 Are You There, God? It's Me, Ellen

Is it possible to be young, progressive, and a Catholic? Ellen Coyne is about to find out…

‘You know, this isn’t a Catholic country anymore,’ someone proudly declared in a Dublin pub where Ellen Coyne was celebrating the repeal of the Eighth Amendment. About to turn 30, like many her age, Ellen had left the Church a long time ago, but she had never stopped believing in and talking to God. Now, she suddenly realized she wasn’t quite ready for this statement to be true, however much of a contradiction it seemed to present with some of her most strongly held views.

Abandoning the Church had been an act of protest, a form of punishment. However, she began to wonder: who had really lost the most? Why should those who did the damage to the Church get to keep it and all its good bits, like going to Mass for the ritual and the community, having a clear guide for living a better life, and the comfort of believing it’s not the end when somebody dies?

But how could she ally herself to an institution she doesn’t entirely agree with? In her first book, Ellen tries to figure out how much she really wants to go back to the Church, and if it is even the right thing to do. A stunningly intelligent and thoughtful debut work of non-fiction.