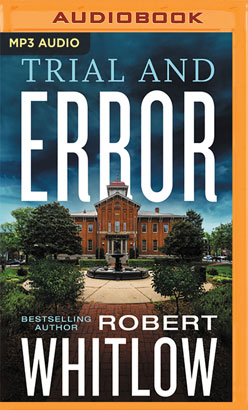 A small-town lawyer has been searching for his daughter for eighteen years. Now another young woman is missing, and he's determined to find them both—no matter the cost.

Buddy Smith built his law practice around tracking down missing children. After all, he knows the agony of being separated from a child. Not long after his daughter's birth, her mother ran away and Buddy never saw either one again.

Gracie Blaylock has known Buddy her entire life, and now that she is clerk of court for the county, their paths cross frequently. When Gracie hears that a teenager in town, Reagan, has gone missing, she knows Buddy is the one for the case.

Reagan's parents are desperate for answers. Together with Gracie and Mayleah—the new detective in town—Buddy chases all leads, hoping to reach Reagan before it's too late. And as he pursues one teen girl, he uncovers clues that could bring him closer to the girl he thought he lost forever: his own daughter.

Master legal writer Robert Whitlow will keep you guessing in this gripping legal drama while reminding you of the power of God's restoration.