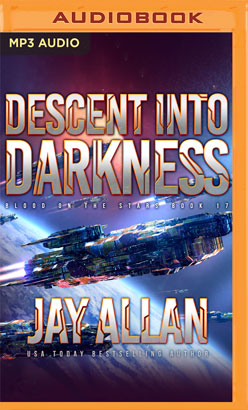 Tyler Barron and his associates are divided, split between two courses of action. Barron doesn't believe in the desperate plan to eradicate the Highborn, the strange virus that has been created for that purpose, but may or may not be the exact formula used by the empire 300 years ago. There are too many possible problems...a small difference in the virus, a cure created by the enemy...for him to accept the plan. Barron commits instead to a traditional defense, even though he knows the chances of ultimate success are almost zero.

Many of Barron's cohorts are on his side, but not all. The leader of the other party is none other than Andi Lafarge, Barron's wife. If the odds were any less gruesome, either one would have given in to the other. But Andi wants nothing less than the extinction of the Highborn, and she believes the virus will work. She will do anything to see it used. Anything.

The two work together, somewhat at least, and apart as well, striving to end the conflict in any way possible, with millions of spacers fighting...and facing probable doom either way. It is the last stand of free humans on the Rim, the final chance to evade slavery...or worse.

Descent into Darkness is the penultimate book of the Blood on the Stars series, leading up to the smashing conclusion, Empire Reborn.