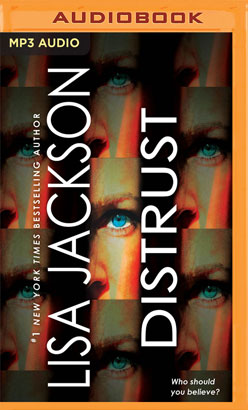 In the tradition of her New York Times bestsellers Revenge, Ruthless and Backlash, Lisa Jackson's fifth omnibus collection combines a two classic Silhouette romances that have been out of print for over 30 years, reviving them for today's readers. With their common theme of unseen threats, Renegade Sun and Midnight Sun are now available in one thrilling volume of revenge, obsession, and deception . . .

Seventy-five plus novels into my career, I'm so happy that I get to keep weaving stories for you. These days, my novels often veer down darker paths. But even in my early books, there were traces of the themes and subjects I find most fascinating--revenge, obsession, and deception . . .

The two novels collected here, with a fabulous new title, Distrust, share a common thread of unseen threats. In Renegade Son, single mother Danielle Summers is convinced her ranch is slowly being sabotaged. Newcomer Chase McEnroe insists she should trust him. But Dani's suspicion that Chase is in league with her enemy is complicated by a secret from his past.

There's nothing secretive about the hostility between two of Oregon's leading lumber families in Midnight Sun. The feud has been long, ruthless, and bloody, and Ashley Stephens and Trevor Daniels are still reeling from the damage it's caused. Now, eight years after their relationship ended, Trevor discovers that not only is his bid for a senate seat in jeopardy, but his life may be too. And the future of both may lie with Ashley . . .

Filled with intrigue, I believe you will enjoy reading the novels in Distrust as much as I have enjoyed revisiting them!