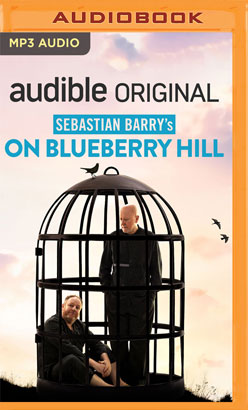 Best friends and worst enemies, Christy and PJ are destined to spend their lives together over the next 20 years in prison. Reflecting on the events and experiences that led them to the present day, this slow-burning tale explores hope, acceptance and forbidden love. Directed by Jim Culleton with music by Denis Clohessy, On Blueberry Hill is a powerful exploration of freedom, friendship and forgiveness. With outstanding performances from Irish Times Theatre Award and Olivier Award winner, Niall Buggy (Christy) and West End and Broadway star David Ganly (PJ).

The stage performance of On Blueberry Hill was presented by Trafalgar Theatre Productions, in association with Hill Street Productions and Incidental Colman. It was Fishamble: The New Play Company's production, performed at Trafalgar Studios in London, United Kingdom in 2020, and produced by Daniel Brodie, Matt Parritt, and Eva Scanlan. The play was originally produced by Fishamble at the Dublin Theatre Festival 2017 and on international tour, including a run at New York's 59E59 Theaters as part of First Irish, supported by the Arts Council and Culture Ireland. Photo by ‘Muse Creative Communications'.