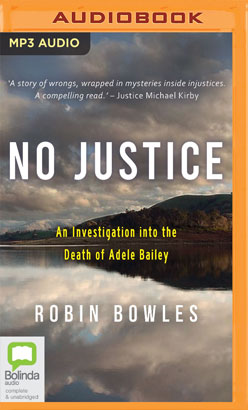 An Investigation into the Death of Adele Bailey

One woman's search for the truth underlying two suspicious deaths.

On 19 July 1995, two young men stumbled upon a skeleton in a disused mineshaft near Bonnie Doon, Victoria. The sensational find was identified as the remains of transsexual prostitute Adele Bailey, who had been missing for more than 17 years. How did Adele Bailey die, and why was her body hidden in a forgotten mineshaft? Was there a connection between Adele Baily and country housewife Jenny Tanner who had been killed on a nearby property? The police believe the connection was Jenny Tanner's brother-in-law and one of Australia's most notorious policemen, Detective Sergeant Denis Tanner.

No Justice delves into the sordid 1970s underworld in which Adele Bailey lived and Denis Tanner worked: a world of drugs, prostitution and corruption, where cops and robbers played by the same unwritten rules.