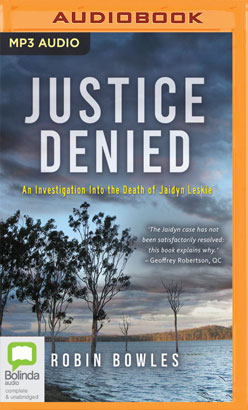 An Investigation into the Death of Jaidyn Leskie

Justice Denied is one woman's search for the truth about a toddler's tragic death, from bestselling author Robin Bowles.

Jaidyn Leskie was the child of Bilynda Williams and Brett Leskie, kidnapped and murdered in Australia in 1997. Despite leads, and the arrest and trial of a prime suspect, Leskie's murder remains unsolved. Despite deciding in 2002 not to hold an inquest into the toddler's death, the case remained in the news for several more years and an inquest was held in 2006 implicating the mother's boyfriend, Greg Domaszewicz.