Students of the Order 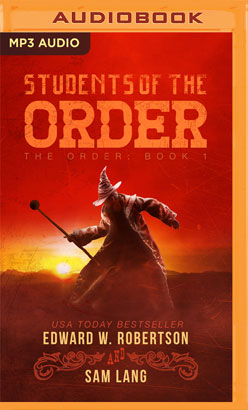 Students of the Order

In the realm of Isodoro, just two things stand between Alliance lands and the spears and muskets of the orcish hordes: the wizards of the Order and constant infighting amongst the orcs themselves.

In the Alliance capital, young Wit has just been promoted from apprentice to full wizard - and saddled with the very unglamorous task of traveling to a distant iron mine to inspect it for fraud. Worse yet, he's partnered with Wa'llach, a drunken dwarven prisoner who's killed more people than most plagues.

Yet those skills are about to become very handy.

For the lord who runs the mine doesn't intend to let Wit get anywhere near it. And across the border, orcs who've hated each other for ages are starting to work together - and to strike into Alliance territory.

It looks like a conspiracy. Smells like one, too. And if it isn't stopped - either by Wit, or by the mysterious clan of orcish rangers that patrols the frontier - the entire Alliance Alliance will blow apart like an orcish death-stick.

A Western-infused epic of outlaws, treachery, treasure, and the frontier, Students of the Order is the first in a new series from a USA Today best-selling author and Audie nominee for Best Fantasy Novel.