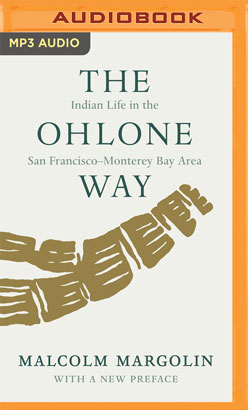 Two hundred years ago, herds of elk and antelope dotted the hills of the San Francisco-Monterey Bay area. Grizzly bears lumbered down to the creeks to fish for silver salmon and steelhead trout. From vast marshlands geese, ducks, and other birds rose in thick clouds “with a sound like that of a hurricane”. This land of “inexpressible fertility", as one early explorer described it, supported one of the densest Indian populations in all of North America.

One of the most groundbreaking and highly acclaimed titles that Heyday has published, The Ohlone Way describes the culture of the Indian people who inhabited the Bay Area prior to the arrival of Europeans. Recently included in the San Francisco Chronicle's “Top 100 Western Non-Fiction” list, The Ohlone Way has been described by critic Pat Holt as a “mini-classic”.

“A beautiful book, written and illustrated with a genuine sympathy....A serious and compelling re-creation.” (The Pacific Sun)

“Remarkable insight in to the lives of the Ohlone Indians.” (San Francisco Chronicle)

“Margolin conveys the texture of daily life, birth, marriage, death, war, the arts, and rituals, and he also discusses the brief history of the Ohlones under the Spanish, Mexican, and American regimes...Margolin does not give way to romanticism or political harangues, and the illustrations have a gritty quality that is preferable to the dreamy, pretty pictures that too often accompany texts like this.” (Choice)