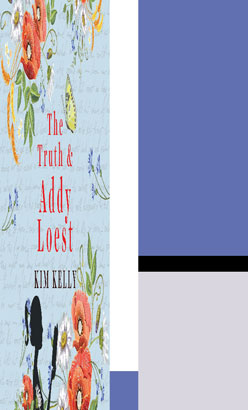 Told with Kim Kelly’s incomparable warmth and wit, The Truth & Addy Loest is a magical trip through shabby-chic inner-city Sydney, a tale of literature, love and of discovering the only story that really matters is the one you write for yourself.

The truth is not a destination – it's a magical ride.

Addy Loest is harbouring a secret – several, in fact. Dedicated overthinker, frockaholic and hard-partier, she’s been doing all she can to avoid the truth for quite some time.

A working-class girl raised between the Port Kembla Steelworks and the surf of the Illawarra coast, Addy is a fish out of water at the prestigious University of Sydney. She’s also the child of German immigrants, and her broken-hearted widower dad won’t tell her anything about her family’s tragic past.

But it’s 1985, a time of all kinds of excess, from big hair to big misogyny, and distractions are easy. Distractions, indeed, are Addy’s best skill – until one hangover too many leads her to meet a particular frock and a particular man, each of whom will bring all her truths hurtling home.

‘Why can’t more people write like this?’
Frank O’Shea, The Age

‘Kelly is a masterful creator of character and voice.’
Julian Leatherdale