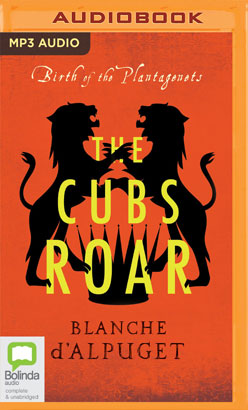 Eleanor of Aquitaine has disappeared. After launching a great rebellion to destroy her husband Henry II’s reign, it seems she has abandoned her sons in the struggle against their formidable father. As treachery radiates from Scotland to the Pyrenees, tension between the kings of France and England erupts into war.

Richard, the mightiest of the English princes, is determined to find his mother and avenge her. But Henry is more cunning than Richard or any of the other rebels anticipated, and the fates of Eleanor, her sons, and France itself, are in jeopardy.

The final book in the sumptuous Birth of the Plantagenets series, The Cubs Roar, illuminates the tumultuous end of Henry II. A tragic history of love, power and betrayal, The Cubs Roar reveals the destruction of an empire at the hands of a broken family.