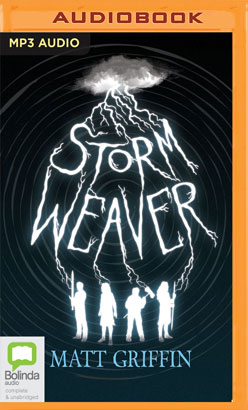 Storm Weaver is another magical and compelling story in the Ayla Trilogy from Matt Griffin.

Back in the claustrophobic tunnels of the defeated Red Root King ...

Ayla and her friends travel further from home and deeper into the strange and ancient world of Fal. The chase leads them through a land of ever-deepening magic, populated with characters bizarre and beautiful, wondrous and dangerous. It leads them to the Old Ones, where Ayla’s newfound powers are greeted with fear and trepidation. They will meet allies and enemies – old and new – with the lines blurred between friend and foe. Battles spiral into war, and not everyone will fall on the same side ...

'Fast-paced … atmospheric … one for fans of fantasy and magic, rooted in Irish mythology and otherworldliness. Fans of Percy Jackson should enjoy this.'
School Librarian Magazine

'... this is a series stamped with a strong Irish identity.'
Evening Echo