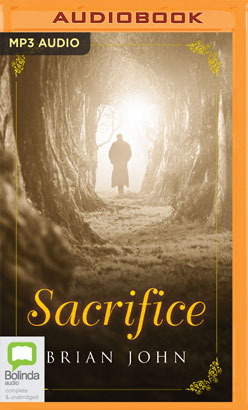 Sacrifice is the darkest and most brutal of all of the stories of the Saga – with the intensity of a Gothic melodrama. But in spite of the terrifying and tragic events recounted by the heroine, compassion and humanity shine through and the tale has a truly heart-rending conclusion.

In the Wild West of Wales, in the year 1808, a shepherd is ambushed and left in the roadway, more dead than alive, with three stripes carved across his chest. A note, written in his own blood, is pinned to his skin. It reads 'For Rhiwallwn. From Gruddnei.'

Four sinister men who call themselves surveyors are clearly responsible for this crime and others that follow. It emerges that there is a 'campaign of retribution' against selected individuals. Mistress Martha Morgan, a young widow with five children, is at the top of the hit list.

As the net tightens around the villains, more is discovered about their backgrounds, their motives and their grotesque methods of working. In a terrifying final confrontation Martha at last faces them, and finds depravity on a scale which she finds almost impossible to deal with.