Queens of the Sea 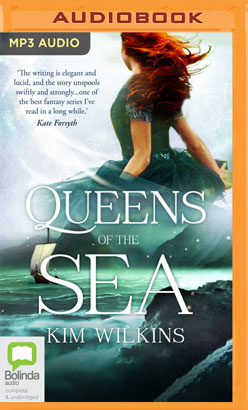 Queens of the Sea

Five sisters, many kingdoms, one battle that will define them all. Thrilling, dazzling historical fantasy from a multi award-winning author, Kim Wilkins.

The unthinkable has happened. Warrior queen Bluebell has lost her kingdom to the Crow King, Hakon and her demented trimartyr sister, Willow. While Bluebell would like nothing more than to storm the city with her army and crush Willow underfoot, the enemy's threat to burn its inhabitants alive prevents her. Worse, Willow seems to have the terrifying god Maava on her side.

Bluebell's niece Rowan has otherworldly power and can help her unite the warring tribes, but her third sister Rose is in hiding with her son and her fourth sister Ivy, Queen of Sæcaster is fleeing abuse with her children. Ash, under-magician, is the only sister who might be able to help Bluebell solve the conundrum. Together they must cross the sea to the land of giants and try to recover Ash's power and save the kingdom and those they love.

As the sisters' journeys converge and the terrifying power of Maava threatens all they hold dear, matters come to a head. To survive they must fight the last battle together, but even with the gods and giants on their side, can they overcome the might of Maava and the unending malice of their errant sister Willow?

'The writing is elegant and lucid, and the story unspools swiftly and strongly ... one of the best fantasy series I've read in a long while.'
Kate Forsyth