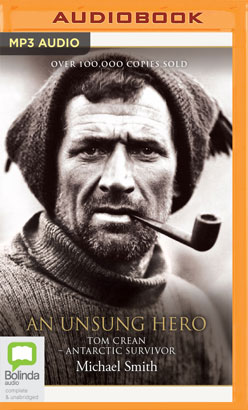 An Unsung Hero is an unforgettable story of triumph over unparalleled hardship and deprivation.

Tom Crean was the farmer’s son from Kerry who sailed on three major expeditions to the unknown Antarctic over a century ago. He served with both Captain Robert Scott and Sir Ernest Shackleton, spent longer on the ice than either and outlived them both. But Tom Crean returned to Ireland and never spoke about his exploits, taking his incredible story to the grave – until the publication of An Unsung Hero, which unearthed his story and saw him rightfully placed amongst the annals of the great explorers.

'Michael Smith has written a splendid biography.'
The Nautical Magazine

'The epic struggles, heroics and the unbelievable hardships of the voyages are wonderfully told.'
The Irish Times

'Wonderful Kiplingesque yarn about a great Irishman who didn't have to die to become a hero.'
Irish Independent