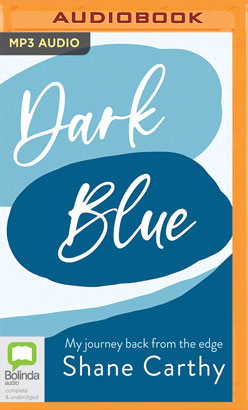 The Despair Behind the Glory – My Journey Back from the Edge

Dark Blue is an honest, powerful and inspirational story about Shane Carthy's battle with Mental Health.

Shane Carthy writes frankly and eloquently about his journey over the last five years. He details, without overdramatising, the downward spiral which, days after producing a man-of-the-match display in Dublin’s 2014 Leinster under-21 final win over Meath, saw him wake up in St Patrick’s Mental Hospital.

Carthy also explains what ultimately brought him back to where he is now, discovering a path where life is worth living. He hopes that through his words and actions he can show people that there is a way out of the suffering they may be experiencing and the path, although difficult, is worth travelling.